Born of a Fishing tradition

Captain Devin Clark is an Outer Banks native who has been working on the water as a commercial fisherman & charter boat mate since he was 15 years old.

He is knowledgeable in local history and water ways, so ask him questions.

It has always been Captains Clark dream to own his own charter business.

Where the name came from

The story of the mosquito fleet

The Mosquito Fleet was the whimsical nickname for the four small steamers that comprised the North Carolina Navy at the beginning of the Civil War. The ships were under orders not only to defend sounds and rivers but also to seize Union ships moving along the coast. The side-wheeled steamer Winslow was the first ship to be commissioned, followed by the Beaufort, Raleigh, and Ellis -all propeller-driven, small river boats originally designed for canal use. The latter three mounted only one gun apiece. Instead of veteran sailors, this diminutive fleet of small boats was manned primarily by soldiers and farmers with no seagoing experience. Nonetheless, the success of these vessels, especially the Winslow, along with that of the Confederate privateers, drew Union strikes at the North Carolina coast in 1861 and 1862. Even though the small gunboats were no match for the enemy ships, Union authorities maintained that landing on the North Carolina mainland first required absolute control of the sounds, an impossibility until the state's navy was destroyed.

With the capture of Roanoke Island by Union forces in February 1862, Confederate commander W. F. Lynch, in an effort to save his vessels (now six in number), moved them to Elizabeth City on the Pasquotank River, but to no avail. At Cobb's Point a short distance downriver, a Union flotilla under Cdr. S. C. Rowan disposed of the mosquito fleet except for the Beaufort, which escaped to Norfolk. 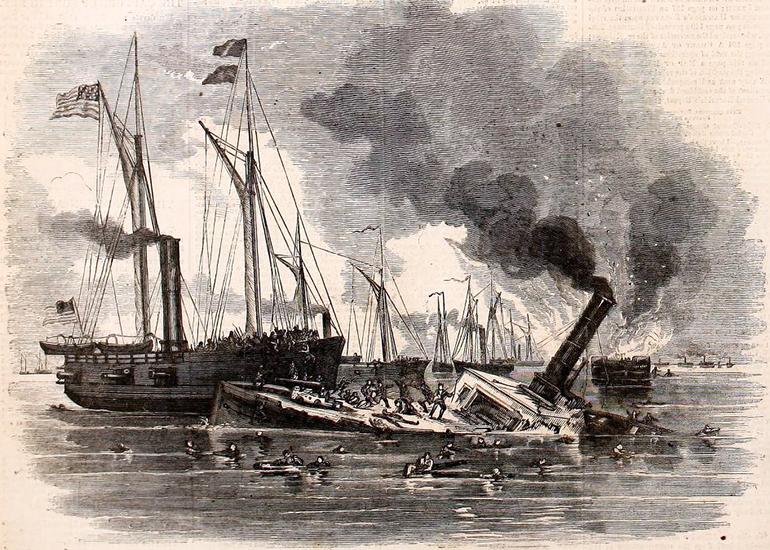 An engraving from Harper's Weekly titled 'The Destruction of Commodore Lynch's Fleet by Union Gunboats,' 1862. Image from Archive.org.